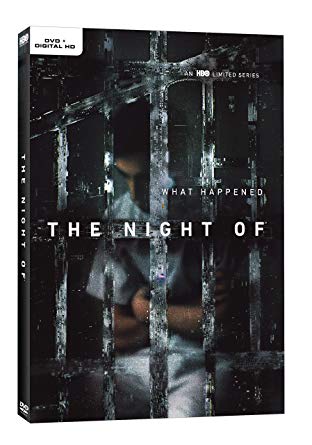 Originally, this review was going to be about the film, A Quiet Place. I still believe that film is worth mentioning, as it is an innovative film and should be watched and studied for years to come. However, while on the clock about a week ago, plans changed. Although I had already written the first four paragraphs for the review, I knew I needed to scrap them in favor for what we are about to talk about today. Rather than focus on a film, today our topic of discussion is going to be an HBO mini series titled, The Night Of. It is an eight-part series, about the murder of a young woman. On trial is Naz (Riz Ahmed) who after partying the night before the murder, woke up next to her with no recollection of what might have happened. Police find the murder weapon in his pocket and it seems like an open and shut case, as the season unfolds though, it becomes apparent that what seemed like an airtight case has many holes to it.

When this DVD set came through the library I was intrigued, but it was only after viewing the first episode was I finally convinced that this would be the subject of the review. The shows creators, Steven Zaillian, who won the Academy Award for Best Adapted Screenplay for Schindler’s List, and Richard Price, The Wire, have crafted a very realistic world that’s implications are just as hard hitting as the dialogue and acting. One such implication is that the car which Ahmed steals is the same his father uses for work every day, but since it is a piece of evidence it cannot be used for work. Unless, as the show explains, Grand Theft is pursued against his son.

Once Naz is arrested, he is given a trial and is convicted. The bulk of the season is focused on his life behind bars, and how his lawyer, John Stone, played well by John Turturro, is fighting for a retrial. Although the early stages of prison life is difficult for Naz, he befriends a very influential prisoner who helps throughout the season. In an interesting twist, the prisoner that Naz befriends, Freddy, only wants to offer his protection because he finds Naz to be intelligent, and that is refreshing to him. Although as the season continues, it became apparent that there is more to the case, Naz would likely not have survived without the knowledge of protection that Freddy provides. In that regard, Michael Williams, does an excellent job at portraying him.

It is difficult to nail down on performance that stands out above the rest. Ahmed plays his part well as the scared, twenty something college student who is in an unimaginable circumstance. His facial expressions perfectly reflect the wrong choices he makes, and the constant personal reflection he makes on them. One such is when he steals his fathers Taxi. If he had not stolen to the car, and not picked up the young women who would soon be found dead, he would not find himself in a prison cell. Helping Ahmed out in this journey John Turturro, who reminded me of Dan Langley (Luther Adler) from the 1951 remake of M. Turturro is a cynical person who has seemingly lost faith in the system, a perfect contrast to where Ahmed is right now, for all he believes is that his innocence is enough to set him free.

HBO is on fire right now with their series, even with Game of Thrones coming to an end next year. I really do hope that the decision is made to make a second season of The Night Of, as while the creators expressed that this was envisioned as a standalone story, you could do several versions of this story well. If it ends up being a one-off story, then we will always have Turturro’s weary eyes as he tries to find the strength to build a case, because he is easily the best part of the series.

Overall this is a true gem that deserves to be watched multiple times. The acting in it is stellar, and the direction is on par with some of the best shows available right now. The idea of watching eight-hour long episodes might seem a little intimidating, but I promise you that it will feel like half the time once you get started. With an engaging story and likeable characters, The Night Of, is a TV show that you need to see.

Hopefully, this piqued your interest. If so, you might be interested to know that the series is based from the BBC series Criminal Justice, which ran from 2008-09. In terms of how faithful of an adaptation it is, except for character names and locations, it is a very accurate representation of the original source material. Much like, The Night Of, Criminal Justice, received wide acclaim so it is worth checking out.