Breaking from tradition, this is a series where I take a look back on films from previous decades that I feel are worth looking into. Either for their impact on the film industry or because of my personal preference. Today, we are looking at film for the latter reason, the Cameron Crowe classic, Almost Famous (2000). 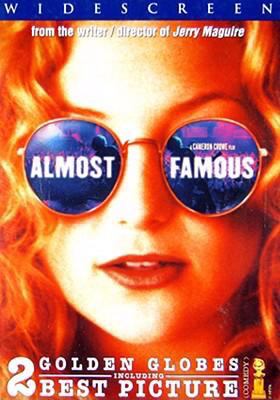 Since I was in grade school I had aspirations of being a writer, over the years those aspirations have morphed from wanting to be a novelist to more of a poet and journalist. Born in the early nineties, just when I was able to form stanzas past simple A,B,A,B rhyme patterns, my brother introduced me to a film that has affected more than any other in my, albeit, short lifetime. Almost Famous is the story of William Miller (Michael Angarano & Patrick Fugit), a child prodigy who through the encouragement of his overbearing mother has become one of the smartest kids in his class. William has an older sister, Anita played by Zooey Deschanel in just her second movie role. The film takes place in 1969, a time of awakening and rebellion among the younger generation, and Anita who is eighteen at the start of the movie has taken inspiration in music to chase her dreams of escaping and seeing the world, she does this by becoming a stewardess, much to the chagrin of her mother, Elaine (Frances McDormand). Elaine, as stated is overbearing and does everything she can to control her children’s lives. This is at first shown as villainess behavior, however as the movie progresses it is shown that it is just her way of protecting them and that she truly does love her children. The character development of Elaine is by far one of the best aspects of the movie. The turning point of the film comes when Anita leaves with her boyfriend to the tune of Simon and Garfunkel’s, America, her parting words to her brother are:

‘Look under your bed. It’ll set you free.’

In what is just a short, two minute scene we see her depart and William look under his bed to find a purse full of records. They are primarily classic rock with bands such as the Beach Boys, Led Zeppelin and the Jimi Hendrix Experience. My love for Led Zeppelin was inspired from this movie. One of the albums is Led Zeppelin II and I remember going to a local record shop to buy it after saving up three weeks of allowance and listening to it. It did set me free. Whole Lotta Love is one of the songs I most associate with my childhood. There is a note left by Anita for William, telling him to listen to Tommy by the Who with a candle lit. This cues a montage that transports us to 1973 and William now wants to be a writer, specifically a music reviewer. His mentor throughout the film is Lester Bangs (Philip Seymour Hoffman), Bangs was a journalist in real life who wrote for Rolling Stone Magazine and has been called, ‘America’s greatest Rock critic.’ William meets friends along the way as well, the most prominent are the ‘band aids’ Penny (Kate Hudson), Sapphire (Fairuza Balk), Polexia (Anna Paquin) and Estrella (Bijou Phillips). While it is not his ambition at the start of the film, William ultimately receives an offer from Rolling Stone to write the article that makes him almost famous.

The cast for this film is lined from top to bottom with stars. With the ever reliable Frances McDormand and Philip Seymour Hoffman offering two of their best roles in what were already stellar filmographies, the acting would have been great if we stopped there. However, the movie builds upon these two strong pillars. While Hoffman portrays a very one dimensional character, it is clear that at some point he was wronged by the music industry and does not want the same treatment for William. The knowledge he imparts to his protégé seems to be everything he wished was said to him when he first started. In regards to McDormand, she is the most complex character in the film. The movie is designed for you to dislike her character, at least at the start. With the audience for this film being mostly younger people it seems reasonable that the point gets across. Her style of parenting would be enough to make any person frustrated. She celebrates Christmas in September to avoid commercialization, not allowing any butter, sugar or bacon and eggs, and most importantly, no Rock and Roll. It is her opinion that all musicians are drug addicts, and thus a negative influence. The scene in which Anita leaves though is the first one in which we see how much she truly loves her daughter and is heartbroken that she is leaving, even wishes that one day she will she her again.

At times, Fugit can come across as a bit whiny, complaining that he is homesick and no longer wants to be a journalist that tours. However, in between these moments he provides some of the more genuine parts on screen. Acting as the audience’s vessel for what is a life most people will never be able to experience, he is the person chasing his dream, something everyone wants to do, but few rarely have to opportunity to. His decision to chase his dream is shown to have negative consequences on his mother, as he misses graduation and several family activities. I found this small detail to be terrific as it showed that his journey was not idyllic and people were going to suffer because of his wants, something that would certainly happen in real life. The final two people that provide outstanding performances are Balk and Hudson. The latter won the Golden Globe for Best Actress in a Leading Role, and was nominated for the Academy Award for Best Actress in a Supporting Role. Lady Goodman, or Penny Lane likes to believe she exists on the outside of society, and sometimes even in her own world. She often says that William lives in his world while she goes about in hers. Now, on the surface this can just be that she lives the life of following Rock Stars, so she has a different lifestyle than William. However, I like to believe it is because she had a much different childhood where she left home because of a severely poor situation. Her world is wherever the next stop on the tour is, she has no real home. Balk happens to be one of my favorite actresses, and the main reason why I am such a fan is apparent in this film. Despite the fact she has very few lines, and appears mainly in the background she puts her heart and soul into her character. It has been said with background characters who are holding spears you can either just hold it, or wonder about its story and how you will use it. The same method can be applied to any situation, and we can tell that Balk fully embraces Sapphire.

One thing that must be talked about is the soundtrack. It is one thing to have several great songs, but it is quite another to use them effectively. Movies such as Suicide Squad (2016), while they have immortal bands such as Credence Clearwater Revival or Eminem, they generally do not build upon the scene they are used on. A movie that does use music effectively would be the first Guardians of the Galaxy (2014) film. While some of the songs seem out of place, such as Hooked on a Feeling, this plays as the Guardians are being beaten and thrown in jail, the subversion of it is intentional. In Almost Famous though, each song is given meaning and elevates the scene that it is in. For example, when Anita leaves her home to song America is playing in the background. The song itself was inspired by a road trip that Paul Simon took with his girlfriend, Cathy. About optimism, beauty and the countries ideals that have seemingly disappeared over time, the song is the perfect choice to play as Anita leaves.

Cameron Crowe has had a rocky career when it comes to filmmaking. On one hand, he can create classics such as this picture, on the other it is not uncommon for him to put out Aloha (which sits at 20% on Rotten Tomatoes). More than anything his writing can be described as melancholy, a certain longing for how things were and what it would be nice if they happened to be. While this type of writing can be a turn off for some, he excels at it to the point where its shortcomings about character development as a whole can be

overlooked. When all your people want is something more, it can be difficult to write them with multiple dimensions. What little problems there are with the script however is masked by the excellent acting.

When it comes to the number of award nominations and wins that Almost Famous received, there are so many that it required its own Wikipedia page. Cross referenced with IMDB, the movie had 103 nominations while it took home fifty-two of them. Of them, four were Academy Award Nominations and one of the wins for Best Writing, Screenplay Written Directly for the Screen, which went to Crowe. One of the other major awards came from the AFI (American Film Institute) Awards, USA, where it won Movie of the Year. In Hollywood it is hard to be funny, and Almost Famous does a good job of doing that as well. In fact, everything that it does, it does well. It is one of the most complete films I have ever seen and have recommended it from the moment I saw it. Resting comfortably with an 89% on Rotten Tomatoes and a 92% audience score, it has received unanimous acclaim. Whether you want to listen to some of the greatest music ever composed, or just want to see solid acting by a few of the best in the game, Almost Famous is a film that delivers a powerful punch in all respects. My only complaint about the film is that the second act tends to drag, the movie is only two hours and two minutes, so it should seem to go by fast. Despite this, I find that the director’s cut of the film, which clocks in at two hours and forty-eight minutes moves at a much smoother pace and goes by faster.